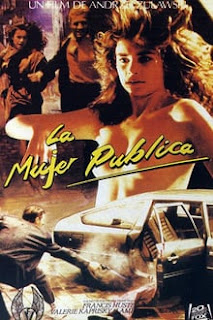 IMDB Rating: 6.5Duration: 1h 53minGenre:  DramaRelease Date: 16 May 1984 (France)Director: Andrzej ZulawskiFilm Stars:  Francis Huster, Valérie Kaprisky, Lambert WilsonLanguage: French-EnglishSubtitle: EnglishQuality/Size: DVD 480p [379MB]  Format: MKVMovie Plot: An unexperienced young actress is invited to play a role in a film based on Dostoyevsky’s ‘The Possessed’. The film director, a Czech immigrant in Paris, takes over her life, and in a short time she is unable to draw the line between acting and reality. She winds up playing a real-life role posing as the dead wife of another Czech immigrant, who is manipulated by the filmmaker into commiting a political assasination.